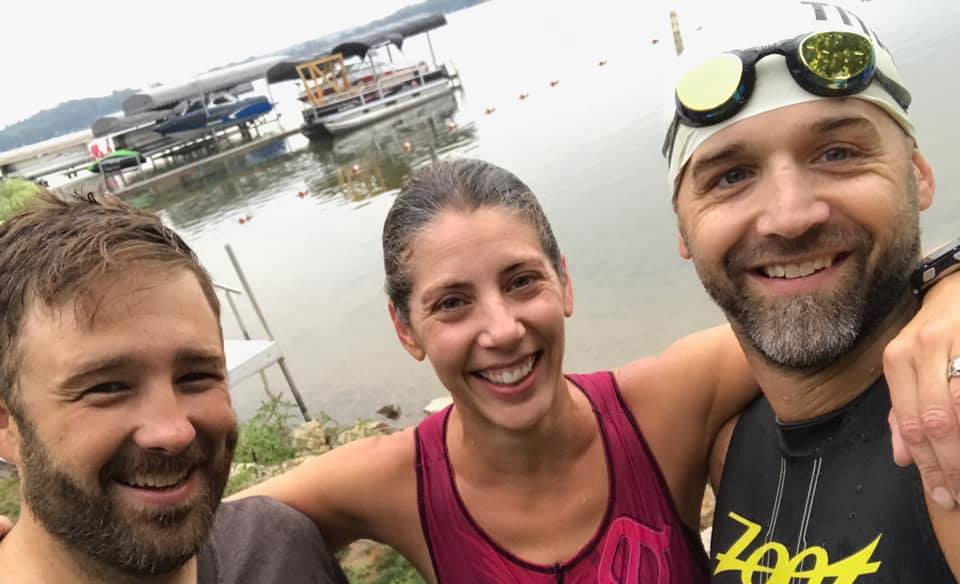 By Chelsea MontesJune 10, 2020No Comments

When Jon Conkling and John Mosey decided to take over as Race Directors for some one of the biggest triathlons in the state, including Grand Rapids Triathlon, they were prepared for a challenging, yet exciting opportunity. Both experienced triathletes, they knew that they could take these already amazing events and raise the bar even higher! However, as experienced and passionate as one can be, no one would have predicted a worldwide pandemic and economic downturn and what it would mean for the endurance sports industry. But, with the pivoting of postponing the 10th Anniversary race of GR Tri and creating an unparalleled virtual 9.5 option, Jon and John have proven that they can handle anything (literally anything!) that comes their way to make sure that triathletes will always have the best event possible! 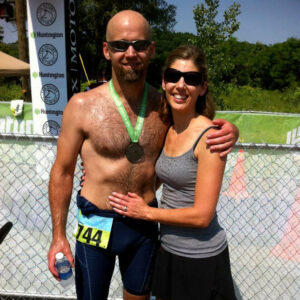 How did you get interested in triathlon?
Shortly after my 36th birthday I started running consistently and getting healthier after many years of working too much and having an on-again/off-again relationship with exercise. Triathlon became a way to stay accountable.

Have you ever raced the event? How was your experience?
I decided in the winter of 2011 that the 2nd annual GR Tri would be a great first-triathlon for me. I signed up for the Olympic and had no idea what I was in for. I was not a swimmer or cyclist and had only just become a runner. I haphazardly trained in a pool and on a cheap 30-year old road bike I bought off Craig’s List. A ridiculously hot race-day finally came, and I really struggled, starting with side-stroking the entire 1500m swim. It was an exceptionally long day and I hated every minute of it… until I came down the finish line. Something “clicked”, and I knew I would do more triathlons. I came back almost every year to GR Tri after that.

Do you have a favorite memory at the event?
I have many fond memories of the race, but hands-down my favorite was from 2017. My wife, Amanda, and I had been training for Ironman Monte-Tremblant later that summer and GR Tri was to be her first half. It was another misery-inducing hot and humid year where everyone struggled to stay on their feet due to the conditions. I was really worried about her all day. I had zero doubt she could do it, that was not the issue. It was just so brutal that experienced triathletes I knew were dropping and really suffering. When she crossed the finish line and had the biggest smile on her face, I knew she had a great experience. It had “clicked” for her, too.

Any race mishaps over the years you like to laugh at now?
I have had a few at GR and other area races. My kids like to remind me that during my first triathlon summer, I came out of transition at Tri Del Sol with my bike helmet on backwards. I looked like a rhino. 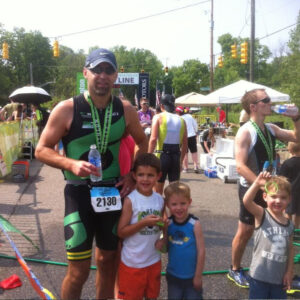 What do you love about triathlon?
I love just about everything to do with this sport – from the toughness of it to the sense of accomplishment – but hands-down I love this community of athletes. You will not find a more welcoming and encouraging group of people anywhere. Even though triathlon is a highly competitive individual sport, everyone builds each other up especially on race day. I am a big believer of the expression “high tide raises all ships” and that is embodied in the West Michigan triathlon community.

What made you decide to take over the races as RD? How did that come about?
This was literally one of those “right time, right place” scenarios that I never ever dreamed could happen. It was not even in the realm of possibility. My co-director and close friend, John Mosey, had a meeting with Ann (Vidro) about renting some equipment for what would become The Dirty Mitten Gravel Triathlon and one thing led to another. John told me after that meeting that taking over GR Tri and MiTi was not a one-man job and I said “I’m in” before he finished his sentence. It was one of those life moments you don’t think about and just go with your gut. A chance like this was a once-in-a-lifetime opportunity.

Besides a global pandemic, what has been the most challenging part of being the RD? The best part?
John and I are incredibly lucky to have come into leading an event that is hands-down one of the best run races anywhere. There is a reason GR Tri is so well respected and the largest independent triathlon in the state – the former directors, Ann and Andy, set the bar very high from the start and worked hard to keep it there. That is why John’s and my manta this first year as RDs has been “don’t screw it up”. So, the challenge has been making sure to keep it the GR Tri that everyone knows and loves. We had a clear, albeit extensive, playbook to follow.

But then the pandemic changed everything. Any challenge we thought we had was amplified ten-fold. One minute, we were on our way to the largest GR Tri ever with over 2000 athletes to having to postpone the race to next year. It was a gut-punch after working so hard for so many months. This is probably the worst time ever to become (or be) a race director. But I also think this is a great opportunity to innovate in many areas, including virtual. This pandemic has shown us that we are very good at thinking on our feet and navigating uncharted waters. Anything that comes our way after this will be a cakewalk.

The best part of being a race director is leading an event that you love and got you into triathlon in the first place. Grand Rapids Tri has given me and my family so much in terms of being active, achieving seemingly “impossible” goals and showing our kids that you can do anything. It is extremely rewarding to be part of that for others as a director.

What are you looking forward to the most next year when the race is in person again? 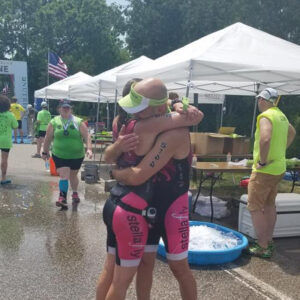 Executing our 10th anniversary event. We have so many great things planned for our athletes (like a beer-garden with new sponsorship partner, New Holland Brewing). John and I will continue to focus on making this anniversary celebration one to remember as we move into 2021.

What makes the GR Virtual Tri different from other virtual races?
There is no other event in the country with so many race-day elements to it. From timing to virtual finish line announcing by Larry Crabbe, we have tried to emulate as many parts of race day as possible. For the past 2 months we have been guided by the question “How can we make this the best virtual race possible for athletes?”.

How do you plan to complete the virtual tri this year?
I plan on doing the sprint later this month. I will not be competing, just doing it as participatory. It is my last chance to do a GR Tri as a partcipant.

Why should someone still do the Grand Rapids Virtual Triathlon 9.5?
As someone who was a long-time participant and an active triathlete, I “get” how people are feeling about not being able to race the normal GR Tri. That is why we have been working so hard to make the 9.5 virtual race an event unto itself. You can still apply your training to a worthwhile goal and make the best of the time in history we find ourselves in.

What is one fun fact about you that no one knows?
I have a sandwich named after me at Devito’s Deli in Ocean City, Maryland – “The Conk”.